You are browsing the site archives by date. 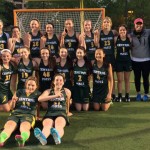 Congratulations to the CMass White Team!

The CMass White Team are the 2014 Saturday League 7/8th Grade Division Champs! After finishing the regular season with an impressive 6-1 record ( one goal loss) the Team defeated Mavs Blue Team, 12-5. The game was held at Assumption College. Congratulations to the team and Coaches Mari and Noelle.